(✳︎We are able to take orders starting from 6pieces.)

Origin and Habitat: Encephalartos eugene-maraisii,  occurs in a remote mountainous area of South Africa’s Limpopo Province’s Waterberg range (ex Transvaal). The estimated occupancy area is 50 km2. There are isolated subpopulations (Number of mature individuals in the wild 982-1200).
Altitude range: 1,400 to 1,500 meters above sea level.
Habitat and Ecology: This species is found on the Waterberg range’s sandstone hills and rocky ridges. It grows in the savanna and opens grassland. The plants have very cold winters, and the annual rainfall ranges from 600 to 750 mm, with the majority falling in the summer. During pollination, a boring beetle (Apinotropis verdoornae) associated only with the Encephalartos eugene-maraisii swarms around the cones of this cycad, laying eggs, forming larvae, and pupating within male cones, emerging as adults by boring through the pollen-covered microsporophylls. This could be one of the ways the female cones were pollinated. Encephalartos Eugene-maraisii attracts and repels insect pollinators by using smells and heat. The plants heat up and emit a strong odor, which drives pollen-covered insects away from male plant cones. Female cones use a milder, more enticing odor to attract these same insects. When the insects switch between sexes, they unintentionally transfer pollen from male cones to female cone-receptive ovules. Over-collection for ornamental purposes is threatening E. Eugene-maraisii, which could lead to reproductive failure. Despite recent surveys showing relatively little illegal collecting, farm managers believe it is occurring.

Description: Encephalartos Eugene Maraisii is a large, robust cycad with trunks up to 4 meters tall, unbranched or branched from the base, and occasionally procumbent (lying along the ground) when long. Young fronds are a lovely silver-blue color. It is distinguished among the blue-leaved species of northern South Africa by leaflets with few or no teeth. Encephalartos Eugene Maraisii is one of South Africa’s most elusive blue cycads.
Derivation of specific name:  Eugene Marais, poet and writer, and uncle of South African botanist Inez Verdoorn, was the Afrikaans naturalist who discovered this cycad. Eugene Marais discovered this unusual cycad near Entabeni in 1926, during a six-month journey into the interior of the Waterberg. He sent a specimen to Dr. Rudolf Marloth, a botanist who, believing that cycads were only found in the eastern parts of the country, renamed the specimen Nelspruit. This was not surprising given that the closest relative of this massive plant grows several hundred miles away in the Karoo’s sandstone krantzes. Marais died before any scientific efforts were made to locate the plants, and it was his niece, Dr. Inez Verdoorn, a well-known botanist, who discovered that his specimen had been mislabeled and launched a new search for the tree. She named it Encephalartos Eugene Maraisii after her uncle when she discovered it.
Stems (trunks): 2.5-4 m tall (rarely taller than 2.5 m when upright; if taller, the plants are usually procumbent) and 30-45 cm in diameter, with tomentose and small regular leaf bases.
Leaves:  Spreading, rigid, light bluish green, almost horizontally held to the crown, 0.7-1.5 m long, including petiole 16-20 cm long. The rachis is nearly straight, but the top third of the leafstalk curves slightly or markedly upwards; they are glabrous except for densely tomentose pulvinus, which is mostly hidden by bracts; and they are glaucous when young. When young, the leaflets are leathery and without nodules, glabrous, and glaucous. The leaflets on the median are linear-oblong, 15-20 cm long, 1.3-1.5 cm wide, cuneate at the base, and pungent. The margins are usually complete, but the lower margin may have one tooth. The leaflets are reduced to one prickle in size, leaving the lower 15 cm of the leafstalk bare to the base.
Cataphylls (scale leaves):  Cataphylls are soft and whitish (Modified leaf, much reduced and thickened, serving to protect the apical meristem in cycads produced in flushes preceding the emergence of cones or leaves.)
Phenology:  In December, both male and female plants produce cones that are greeny-grey with a dense layer of dark brown hair, giving the cones a dark brown-red appearance. 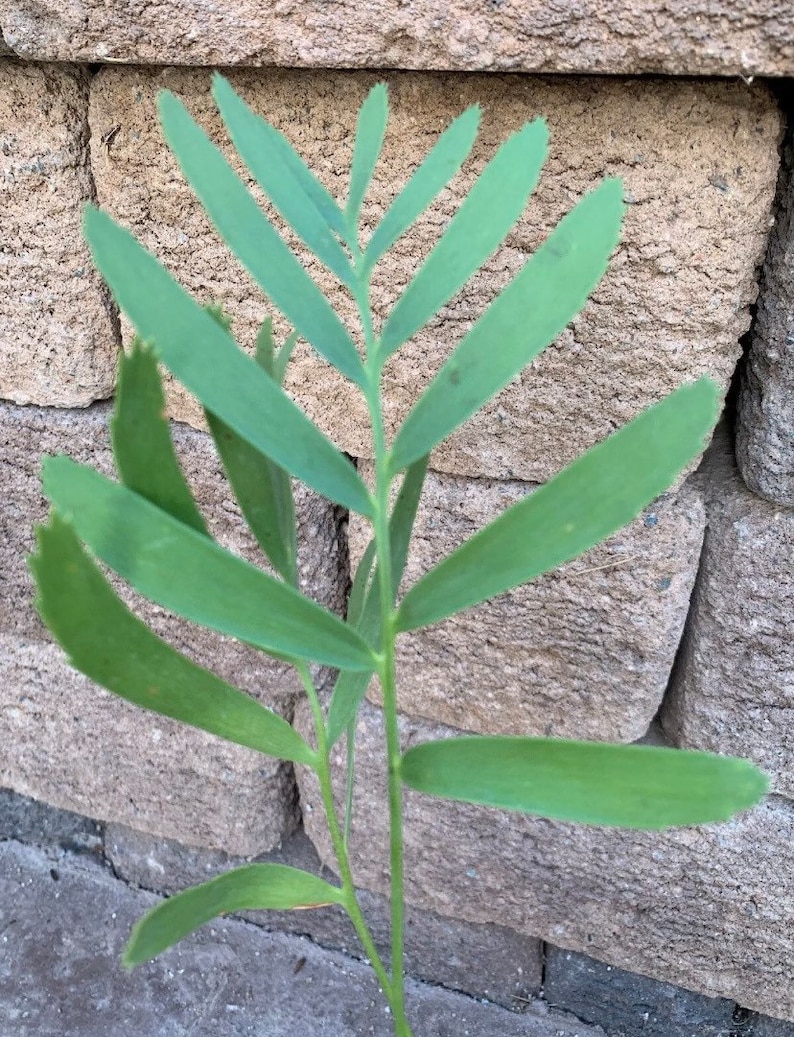