Encephalartos horridus is a slow-growing plant that can live for centuries and it is much prized in horticulture for its stunning blue leaves. 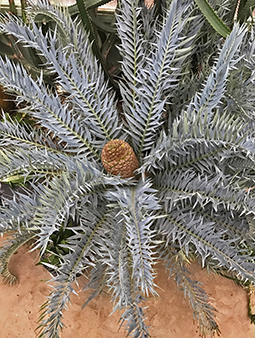 Encephalartos is a large genus in the Zamiaceae family, one of the three cycad families. Though they resemble small palms, cycads are an ancient group of cone-bearing plants whose lineage dates back many millions of years, to a time before flowering plants appeared on the global stage. Though cycads can be found all over the world, the genus Encephalartos is native to Africa. Some of the most strikingly blue foliage species are found in southern South Africa, including Encephalartos horridus, which grows near the city of Port Elizabeth.

Encephalartos horridus is notable not only for its powder-blue leaves but also for its stiff, sharp leaflets, whose ability to stab the unwary gave the species its name. This species is not as large as some others, never getting more than a few feet tall, but it c 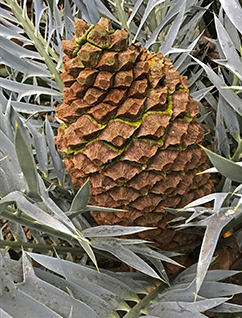 an put out offsets and become a large clump in time. Like all cycads, E. horridus has separate male and female plants, but the appearance of the two sexes is identical up until they reach maturity and form cones. When this happens, the females can be readily distinguished by their wider and heavier cones with larger scales. Though the outside of the cone is blue-green to brown in color, the seeds within the female cone are bright red, a trait that can only be observed when the cones mature and break apart.

The leaves of Encephalartos horridus are several feet long and arch outward from the growing point. Each one has a cylindrical mid-rib, with spiky leaflets jutting out to either side. In addition to the sharp point at the tip of e 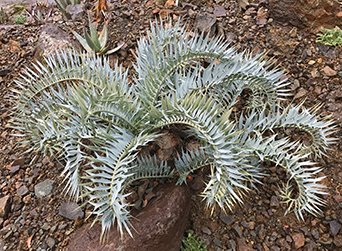 ach leaflet, there are one or two lobes lower down which end in equally sharp points. The tips of the leaves usually curl downward, though this is more pronounced in some forms than in others.

E. horridus is a slow-growing plant that can live for centuries, and it is much prized in horticulture for its stunning blue leaves and its dramatic prickly appearance.

Be the first to review “Encephalartos Horridus” Cancel reply